Congratulations to everyone who participated in the EY River Run Classic on Sunday! The SRRA put on another fantastic event — and it turned out to be a beautiful Sunday morning in the Bridge City!

As we celebrate our successes we also keep in mind the northern wildfires evacuees. Last week Brainsport was approached by Red Cross volunteer and owner of Fitness 2J2, Joel Petersen, asking for running shoe donations for the fitness programs he's running for evacuees. Well, that quickly turned into a full on campaign to help get them geared up. You may have seen our posts on social media asking for ready-to-use-gear donations to be brought to the store. We've received a solid response from the community, so thought it would be nice to learn a bit more from Joel about what's been going on.

Tara: You work very closely with Aboriginal communities across the province with your business Fitness 2J2. At what point did you decide you wanted to use your expertise to help out the evacuees?

Joel: On Sunday (July 5) after getting home from a run, I was contacted by a community member in Saskatoon. She was concerned that there was nothing for the kids to do during the day or evening. And that the guests from the north could use some programming choices and options. I contacted the Red Cross and was directed to the recreation lead. I explained what skill set I could offer and she asked me to take over managing the sport, fitness and recreation for two locations (soccer centres) in Saskatoon. Within 12 hours the centres had some equipment (from my garage) and some items purchased through the U of S Aboriginal Initiatives Office, and kids were playing soccer and hockey.

Tara: What kinds of programs have you been running with the evacuees and how have you seen it help in getting through this tough time?

Joel: Working with the community we have developed a framework for fitness and sport for each day. Added to each day are various recreation options, like Pike Lake for the day and the Forestry Farm. We have a run/jog/walk club first thing at 7 a.m. Functional fitness sessions for youth and adults during the day and soccer, hockey, softball, basketball, volleyball, football, tennis and skateboarding. 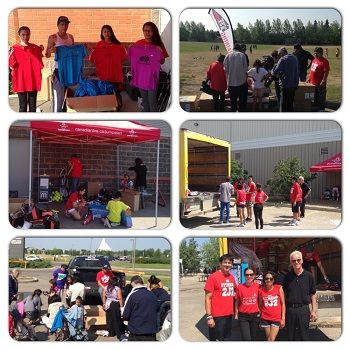 Tara: Many of the evacuees left their homes with very few belongings? What made you think to contact Brainsport to help get people geared up?

Joel: True, some of our guests had only 20 minutes to grab items and were forced to leave. Can you imagine if you had a family that you had to get out of a house in 20 minutes? I know what it would be like at my house. I provide no-cost fitness sessions in the Pleasant Hill community. I have seen firsthand the thoughtful actions of Brainsport with the annual shoe drive at St. Mary's Community School. Also, we in the running community and triathlon community are always willing to give a hand or encouragement for fellow people who want to live healthy lifestyles. We know the importance of the physical portion within the holistic balance that we strive for.

Tara: What has been the response from evacuees to the donations?

Joel: The donations, especially for the runners and walkers, has been awesome. Many have expressed their thankfulness and are humbly surprised by the great running shoes to select from. Initially the shoes were for those who had signed up to join run/jog/walk club, and who had signed up for sports. Then it became evident that a substantial number of the elders did not have proper footwear, or the younger youth. It was first-come-first-serve — a challenge to do when there are about 2600 people in Saskatoon from the north. So the main effort was the two soccer centres.

Tara: For anyone out there wanting to donate what should they do?

Joel: It appears our guests will not be returning to what is left of their homes for an estimated two more weeks. There's information on the Red Cross website for donation procedures. As far as runners/joggers/walkers go. Brainsport has taken the lead by already looking at the implied needs: socks, shorts, tech shirts, hats. We all know what it's like when you are missing one of those items on a hot July day. I appreciate what our running community in Saskatoon has been able to do in such a quick window. That’s what we do!

Tri-Unity Challenge
This event held at Pasquia Park, between Carrot River and Arborfield, on August 8 has something for everyone — from pre-schoolers right on up to those looking to run a half-marathon! 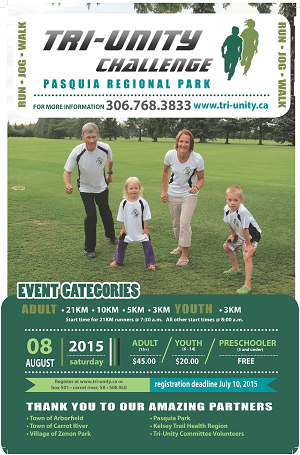 Crown The King Openwater Swim
This openwater swim race is held in Waskesiu on September 7. It features 1.6K and 4K distances. For more information click here.

Miles for Smiles
Support the Saskatchewan Children's Hospital Foundation at the 12th Annual Miles for Smiles on September 12. There's a 2.5K fun run, a 5K walk/run and a 10K run. For more information visit www.miles4smiles.usask.ca.

Melfort Multi-k
The 5th Annual Melfort Multi-k get's underway September 19. This event was named by Canadian Running Magazine as one of the Top 10 Fall Races to attend in Canada last year! 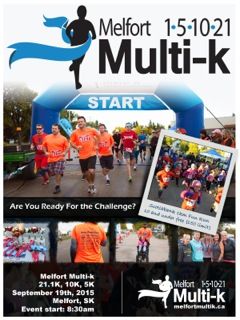 There's a distance for everyone: Scotiabank 1K Fun Run Free for 150 kids 10 and under. 5K and 10K walk/run and 21.1 K run. For more information go to www.melfortmultik.ca.